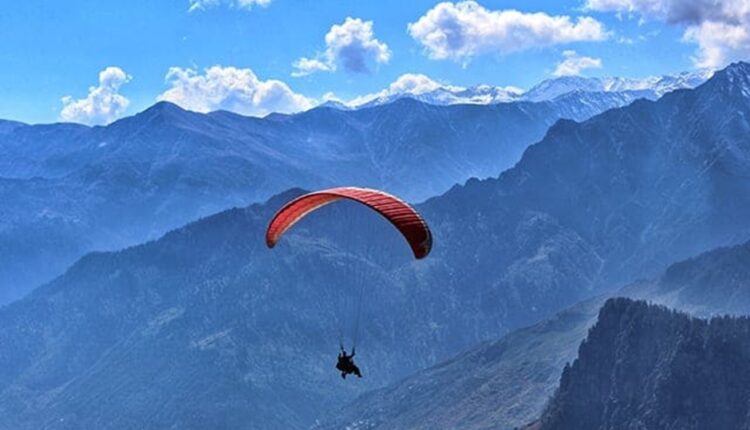 Manali Paragliding | Things to do in Manali

Flying paragliders, which are lightweight, free-flying, foot-launched glider aircraft with no solid main construction, is a leisure and competitive adventure activity. The pilot sits in a harness or rests supine beneath a cloth wing in a cocoon-like ‘pod.’ The suspension lines, the pressure of air entering vents in the front of the wing, and the aerodynamic forces of air flowing over the exterior all work together to keep the wing form. The pilot may acquire height by skillfully exploiting sources of lift, typically reaching heights of a few thousand metres.

Depending on the location, time, and equipment, paragliding in Manali might cost anything from INR 1000 to INR 4000. Tandem rides are more expensive than solo rides, and expert pilots are much more expensive, but they are well worth it.

A basic paragliding course for solo flights starts at INR 10,000. It normally takes 7 days to complete the course.

Gliding in the middle of snow-capped peaks, wide blue sky, and magical vistas of the valleys around you will be an unforgettable experience. Under the guidance of a competent teacher, take part in this exhilarating activity and make it a memorable one!

In 15 minutes, fly from Falayn to Naggar and soar over the Dobhi Valley, which blossoms in the spring Drive to Dobhi in Naggar and participate in an informative lecture before flying above the skies.

Solang Valley is the most popular destination for both tandem and solo flights, and is located 11 kilometres from Manali at Rohtang Pass. From this location, the views of the valley, apple orchards, and snow-capped hills are simply breathtaking. Make sure the operator arranges transportation to and from the launch point when booking a paragliding vacation in Solang. The only means to get to the region is by ropeway, which costs an extra INR 1500–2000.

Beginning in Taleti Valley and ending in Talogi Valley after 20 minutes, this paragliding ride gives one of Manali’s most magnificent views. Manali is roughly 40 kilometres from Taleti.

The location is still relatively obscure, making it one of the newest paragliding sites. As a result, visitor numbers are low.. Burua is therefore perfect for those seeking less crowded paragliding destinations.

This is one of the oldest paragliding sites, located 33 kilometres from Manali and allowing both high and long flights.

Gulaba, 30 kilometres from Manali, is known for its biodiversity and beautiful scenery. Gulaba’s rose valleys, apple orchards, and animals are best appreciated from above! Here, both high and medium flights are permitted.

When is the best time to paraglide in Manali?

In Manali, the summer months of April and June are ideal for paragliding. The weather is perfect, with temperatures ranging from 10 to 25 degrees Celsius. The months of October through December are other good choices, but keep in mind that this is the off-season, and the weather may not be as pleasant as it is during the summer. During the monsoon season, paragliding is not authorised.

1.Before you go paragliding, make sure you have the right footwear and thermal clothing.Sunglasses that reflect light are also advised.

4.Participation is not authorised for children under the age of twelve.

5.Because paragliding is such an extreme sport, it’s critical to be aware of all of the risks. People with heart or lung problems, sinus problems, ear infections, motion sickness, and pregnant women should avoid it.

This is Keshav, a proactive BSc Biotechnology and Database Management student at Gandhi Institute of Technology and Management with strong academic achievements and volunteering experience. Possess strong leadership and communication skills with fluency in English, Hindi, Telugu. Very passionate to develop myself every-day. Keen to pursue a career in Professional Services with a focus on research and development roles.

Aloha on the Ganges in Rishikesh!

How Long Does A Mortgage Preapproval Last